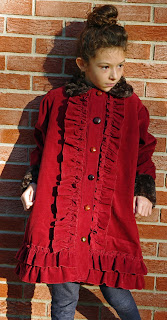 Allison has outgrown nearly everything in her closet.  This includes outerwear.  She has a play coat handed down last year from a friend.  But, it's in play condition, not "going places" condition.  I was hoping to buy a coat since they take so many hours and she needs me to sew so many things.  I looked at coats in a variety of stores.  My oh my!  The quality and cost was not good at all.  The standard price seemed to be $30.  This was a coat that might fit one year, and might not hold up that long.  I'm still surprised at the low quality available.
Thankfully, I know how to sew it, and had much of the materials in my stash.  A nice lady gave me a bunch of burgundy corduroy a year or so ago.  I'm now glad that I often to say yes to those wanting to unload some stash. The buttons were all gathered the same way.  Between the two main body layers I added a layer of fleece for warmth. I had purchased an adult fleece cape at Goodwill a few years ago.  I've been cutting mittens from it for a few years.  There was just enough left to cut the front and back for this coat.  So, the only thing I needed was the fur.  Thankfully, just as I was ready to buy, JoAnns put the fake fur on 40% off and sent out and extra 20% off coupon.  I was able to get the fur for only $16.
I was quite nervous about such a big adventure with just our t-shirt sloper to work from.  I'm not a trained designer with any idea of how to draft curves.  Nor, was I sure which pieces to put together in which order.  Thankfully, my mind was reasonably clear as I worked this project this past week.  I don't know the exact number of hours it took, but not too many.  I'd guess a few of the dresses we've made have taken more time. ;)
I used the pattern I created for her Knit Top base and made sure it was wider and longer than the one I made last time.  I added width to it for clothing and grow room.  I added a button placket, also.  For the sleeve, I wanted a bit of gather in them.  So I split open the head of the sleeve and added some gather room. The sleeves are extra long and roll up for added detail and growth. I created my own collar pattern with the fur part being bigger than the corduroy under-piece.
The ruffles were added based on a few coats she found online that she liked.  I used the 1.5 times length idea for the ruffles.  The buttons are all of similar type but vary in color and size somewhat.  The variation was Allison's idea.
The fur lining is perfect.  It's luxurious looking, adds warmth, and gives a nice slip factor for clothing. I'd heard awful stories about working with fake fur and minkee...sooo much mess.  Yes, cutting it was a fluffy, fur flying adventure.  But, nothing the vacuum couldn't handle.  I even vacuumed the cut fabric pieces.  There was no shedding at all while sewing.  I didn't use the serger on the fur, though. 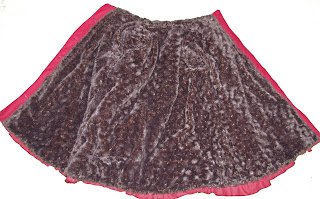 The only part I used the serger for was roll hemming the ruffle edges.  The serger made quick work of this detail.
Lastly, since I'm cheap and white thread is generally cheaper than colored thread, the inside is all sewn with white.  No one will ever see it. ;)
Most importantly, Allison loves, loves, loves her coat.  It fits nicely.  And, will likely last us until it doesn't fit anymore.  With the extra grow room I added, that could be a few years.  A few years with a nice, and washable, coat for $16 is a pretty good deal.  The last coat I made lasted her three years and is now being worn by the neighbor girl.
So if you have an idea to make a coat...don't be afraid.  It's not as hard as you'd think. :)
Happy Sewing!
Debbie