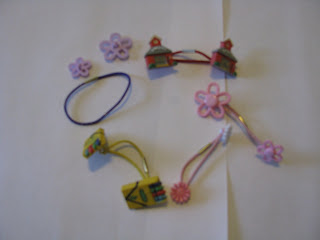 Materials Needed: Ponytail bands- the thinner the better
Buttons with large shank holes
Directions:
Fold the band circle in half
Push end of band through button's shank hole
Bring empty band end through the end that just came through the button and pull tight
Push empty band end through another button's shank hole
Bring first button through second band end and pull tight
You should have a Button Ponytail band with one button on each end.
To Use:
Wrap around ponytail one time and loop one button end through the other button end. For thinner ponytails you can wrap as many times as needed.
Variation: Instead of placing buttons on opposing ends of band, put a single button or group them together and use the band in the traditional manner leaving the button(s) at the top of the ponytail.

You can use this to create accessories for other outfits with matching buttons or for personalized ponytail bands.

Children can do it also...my 5 year-old got all excited and made some herself after I showed her how. Now I'll need to hide my buttons......lol.
Posted by Debbie at 10:02 AM